Medieval button in the form of a rose made of bronze.

This pretty replica of a button in the shape of a rose petal was made according to historical models from the late Middle Ages and the Renaissance and has an eyelet on the back.

Buttons in the form of flowers can be found several times in the finds from the late Middle Ages and the Renaissance and were characteristic of the clothing of that time, in which long rows of buttons for the decorative closure of clothing were fashionable.

With the solid cast eyelet on the underside, the medieval button can be sewn onto the garment with just a few stitches.

The medieval button is made of high quality jewelry bronze. 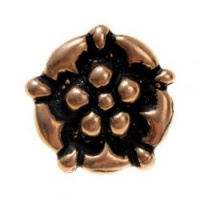