About Stockholm Manual on Sabre Fencing, 1893

Near the end of the 19th century, the Swedish military desired a new manual about sabre fencing. This resulted in the 1893 manual, Instruktion I sabelfäktning till fots (Manual on Sabre Fencing on Foot), most likely penned by the famed military leader, “the father of Swedish sports,” Viktor Balck, and illustrated by his equally famous acquaintance, the renowned wildlife painter Bruno Liljefors.

The system described in the manual is rooted in the basics seen throughout the European fencing systems of the time, yet it also deviates from them in intriguing ways and advocates for approaches that are rather unique. In addition, the text sheds light on historical training methodology by describing how lessons were directed and by presenting images of training tools.

Until now, the Swedish military sabre system has not been particularly accessible to a wider audience due to a lack of English language materials and translations. This book will be one of the first such resources about this intriguing approach to sabre fencing, with a clear and understandable translation that will be useful in the fencing hall.

When he first tried his hand at historical fencing at Tampere HEMA, Pentti Koivuniemi was instantly enamoured with the combination of practical training and period-source study that form the basis of these martial arts. Pentti majored in English with a specialisation in translation at Tampere University while continuing to study historical fencing, and so, gradually, he felt compelled to translate European martial arts texts for the international community. 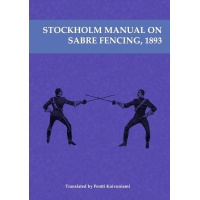