Lessons on the thrust

In 1664, Jéann Daniel L’Ange published the Deutliche und gründliche Erklärung der adelichen und ritterlichen freyen Fecht-Kunst in Heidelberg, Germany. This was one of the first concise and systematic treatises on the typically German style of rapier fencing that evolved from the teachings of Fabris and his German students. L’Ange presents his personal point of view on this fencing style, which includes a rather large selection of brutal grappling moves.

This first English translation of L’Ange’s treatise, made by Reinier van Noort and published exactly 350 years after the original edition, provides a fascinating viewpoint on a fencing style that is underrepresented in the modern studies on historical martial arts. In this translation, Jéann Daniel L’Ange’s view on fencing is presented in a way that is both close to the original, and clearly understandable by a modern reader. Meticulously cleaned scans of the 61 page size plates from the original treatise are also included.

Reinier van Noort has been researching and teaching rapier fencing since 2010, focusing mainly on the single rapier as used in the Netherlands and Germany in the late 17th century. He has translated the anonymousVechtboek (UBL BPL 3281), Johann Georg Pascha’s Kurtze iedoch Deutliche Beschribung handlend von Fechten auff den Stoß und Hieb, and more. Reinier has been a member of HEMAC since 2010. 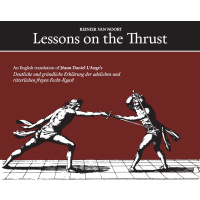