Witnesses at the Margins of Medieval Society

Seldom heard from in modern times, those on the margins of Medieval Europe have much to tell us about the society that defined them. More than just a fascinating cast of characters, the visionaries and sexual dissidents, the suicidal and psychologically unbalanced, the lepers and converts of Medieval times reveal the fears of a people for whom life was made both meaningful and terrifying by the sacred. After centuries of historical silence, these and other disenfranchised members of the medieval public have been given voice by Michael Goodich in a unique collection of texts from the mid-eleventh through the fourteenth century. Translated from their original Latin, Hebrew, and Arabic, these texts, many of them first person narratives or testimonies, give insight into those figures who made Medieval society uneasy. The book is divided into chapters dealing with the Jewish community, apostates and converts, sexual nonconformists, victims of the Devil, Christian heretics, and the liminal and temporarily marginalized. The texts included both give spiritual voice to such groups, and illuminate the more mundane affairs of their daily lives-child rearing, social life, economic difficulties, sexuality, dreams, emotional instability, and gender relations among them. 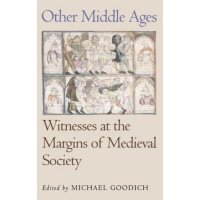