This pretty replica of a medieval pewter button was made according to a historical model from the excavations in Tver in Russia and dates from the 13th to 14th centuries.

Spherical buttons are often found in the finds from the Middle Ages and were characteristic of the clothing of that time, in which long rows of buttons were used to decorate clothing.

With the solid cast eyelet on the underside, the medieval head can be sewn onto the garment with a few stitches. 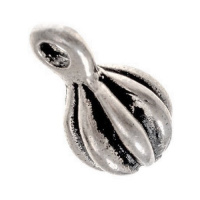