Investigation of the Company of Liechtenauer

In medieval Germany, combat was a matter of life and death, and knowing the Art of Fencing was to have control over it: to have the power to save or take lives. Those who knew the Art of Fencing kept such knowledge as a closely guarded secret.

In 15th century Bavaria, a small and secretive fellowship of fencing masters encoded their knowledge into a cryptic and arcane verse. Their Art, the ‘one true art of the sword’, was reserved only for the initiated. At the head of this fellowship was a grand-master known as Johannes Liechtenauer.

Presented within this book is an investigation of the Company of Liechtenauer, tracing their connections and influences through archival records spanning more than a century. Scholarly Fencing is contrasted with what was referred to as ‘Common Fencing’.

Separating the ‘common’ from the ‘initiated’, this book demonstrates the Aristotelian and Scholastic approach that defined the secret Art of Liechtenauer, and describes the science of sword-fighting in the 15th and 16th centuries. 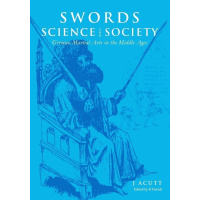