Armour from the battle of Wisby, 1361

On 27th July 1361 a violent battle took place between the King of Sweden and the defenders of the city of Welsby on the Swedish island of Gotland. The Welsby army was slaughtered and the combatants, mostly peasants, were buried in huge pits, still in their outdated armour. Originally published in 1939 in two volumes, this is a one-volume reprint of Thordeman’s important study, long out of print, of the battle, the human remains and the artefacts. Fully illustrated throughout, the volume provides a vivid and meticulously detailed record of battle wound pathology and early 14th-century armour.
Rare book, unused, only slight storage wear. More than 600 pages, hardback. 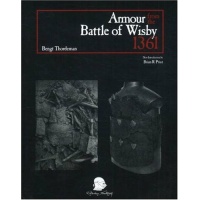