Proper Description of Thrust-Fencing with the Single Rapier

To a modern student of fencing, Pascha’s Proper Description of Thrust-Fencing with the Single Rapier presents a clear introduction to the German style of rapier fencing based on the teachings of Fabris, as well as many useful lessons on thrust-fencing and proceeding with resolution. Furthermore, this book offers an important insight into the early evolution of this lineage, and places many historical figures and publications in their proper context.

Salvator Fabris was arguably the most famous fencing master of the 17th century. After publishing his treatise Lo Schermo in Copenhagen in 1606, Fabris returned to his native Padua. However, his teachings stayed alive in Denmark and Germany, rapidly replacing the older, local styles of fencing.

Johann Georg Pascha was another German fencing master, who published numerous treatises on fencing and other arts young nobles should learn. In 1671, he signed the dedication on a book titled Proper Description of Thrust-Fencing with the Single Rapier, now known by its shelf number Mscr.Dresd.C.13. Pascha writes that this book presents the fencing lessons of master Von und zum Velde, who learned them “in Italy from the famous Salvatore”, to which Pascha added his own lessons about “parrying, as well as holds, and other lessons and guards” to make “a complete fencing book”. Interestingly, British Library Ms 17533 contains the same text as the Dresden manuscript, minus Pascha’s additions, thus allowing for a direct comparison between the two versions of this text.

In this volume, the reader will find a complete translation of Ms.Dresd.C.13 and the illustrations from British Library MS 17533. Additionally, the translators provide a thorough comparison of these two original works, as well as a full discussion on their authorship.

To a modern student of fencing, this work presents a clear introduction to the German style of rapier fencing based on the teachings of Fabris, as well as many useful lessons on thrust-fencing and proceeding with resolution. Furthermore, this book offers an important insight into the early evolution of this lineage, and places many historical figures and publications in their proper context.

Reinier van Noort has been involved with HEMA since 2005, and has been studying fencing with the rapier since 2009. He has published several translations of fencing treatises, such as Bruchius’s Scherm- ofte Wapen-Konste (1671), Köppe’s Newer Discurs (1619), and Di Mazo’s Spada Maestra, and he has taught and competed with the rapier on four continents. Currently, Reinier lives near Oslo, where he teaches with Fekteklubben Frie Duellister, and continues to present his work through Ense et Mente.

Jan Schäfer has been doing historical fencing since 2003, and is especially interested in German-language sources from the 17th and 18th centuries. He teaches from these sources in his home club Schwertspiel e.V. Verein für traditionelle Kampfkünste in Dresden, of which he is a founding member. Furthermore, Jan publishes his research into fencing treatises, their authors, and their context on his well-regarded blog Fechgeschichte.

Reinier and Jan have been collaborating on translations and research projects since 2011, mainly on 17th and 18th century German fencing. This book presents a culmination of many years of fruitful collaboration.

We always do our best to edit and check over our books as thoroughly as possible before publication, but sometimes errors slip through; also, sometimes the authors and translators develop further or greater insights into the material that would lead to proposed changes after the date of publication. In such circumstances, we may publish downloadable errata to accompany the book.

Errata for Proper Description of Thrust-Fencing with the Single Rapier (.pdf) 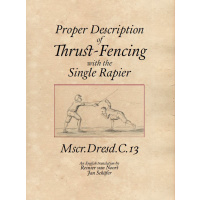