Of the single rapier

In 1671, Johannes Georgius Bruchius published the Grondige Beschryvinge van de Edele ende Ridderlijcke Scherm- ofte Wapen-Konste in Leiden, in the Netherlands. In his work, Bruchius described a style of rapier fencing that evolved from the teachings of Fabris. He presents this style through a brief explanation of the principles of fencing followed by 212 lessons.

Bruchius’ weapon was the rapier: a dangerous yet elegant sword of the 17th century. Its usage was dynamic and effective, with a focus on personal safety through controlling the opponent’s blade. Not only does this treatise discuss bladework by way of thrusts and parries, Bruchius teaches grappling and disarming techniques, and provides many solutions to common problems that occur during fencing practice. 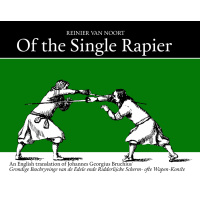