Today, fighting with dagger versus dagger, or with knife versus knife, is not a common scenario that people might expect to face. However, it was more common in the Middle Ages and in the Renaissance, when it was normal for people to wear a dagger on their belt. Arguments or fights with daggers could break out; and while duels were more often fought with swords, combatants could also agree to do so with daggers.

This is not a book on modern knife fighting; rather, it is a book dealing with the historical knife fighting of Renaissance Italy. The modern blade aficionado will also find material of interest. The book offers several views of short bladed weapons that were developed and tested when cold steel was the king of weaponcraft and when duels were more common than today.

Carlo Parisi was born in Northern Italy in 1974. He has always been interested in weapons and martial arts, and the two met in Historical Fencing, which he began practising in roughly 1998. A few years later, he started doing his own research, and became a member of HEMAC in 2003. Since then, he’s been teaching classes at various events in Europe, and set up his own club in 2011. His main interests are sabres and daggers, but he studies a variety of weapons and methods. This is his first book on fencing. 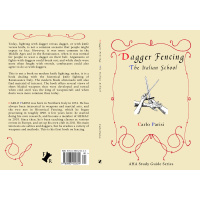