Renaissance SwordsmanshipThe Illustrated Use of Rapiers and Cut-and-Thrust Swords

Throughout the 16th century, a variety of new, single-handed civilian weapons were being developed, including the German Rappier, another cut-and-thrust weapon used for sportive fencing, as described in Joachim Meyer’s Fechtbuch of 1570. 1570 is also the year in which the Italian swordmaster Signior Rocco Benetti first settled in England advocating the use of the rapier for thrusting as opposed to cutting or slashing when engaged in a duel. Nevertheless, the English word rapier generally refers to a primarily thrusting weapon, developed by the year 1600 as a result of the geometrical theories of such masters as Camillo Agrippa and Ridolfo Capoferro. The rapier became extremely fashionable throughout Europe with the wealthier classes, but was not without its detractors. Some people, such as George Silver, disapproved of its technical potential and the duelling use to which it was put. This is the most thorough work ever about historical swordsmanship. It is both a general reference and an instructional guide for advanced and beginning sword enthusiasts, students of military history and martial artists. Includes rare historical info and 100 original drawings. John Clements has practiced cut-and-thrust swordsmanship for almost 20 years and trains regularly in long-sword, sword and shield, sword and buckler, sword and dagger, medieval spear, and rapier and dagger methods. He lectures on historical weaponry and is an ardent promoter of contact-weapon sparring with historical replica swords. 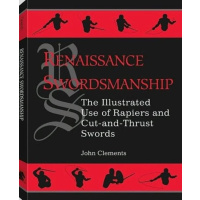